Best neighborhoods in Bogotá: why stay in La Candelaria 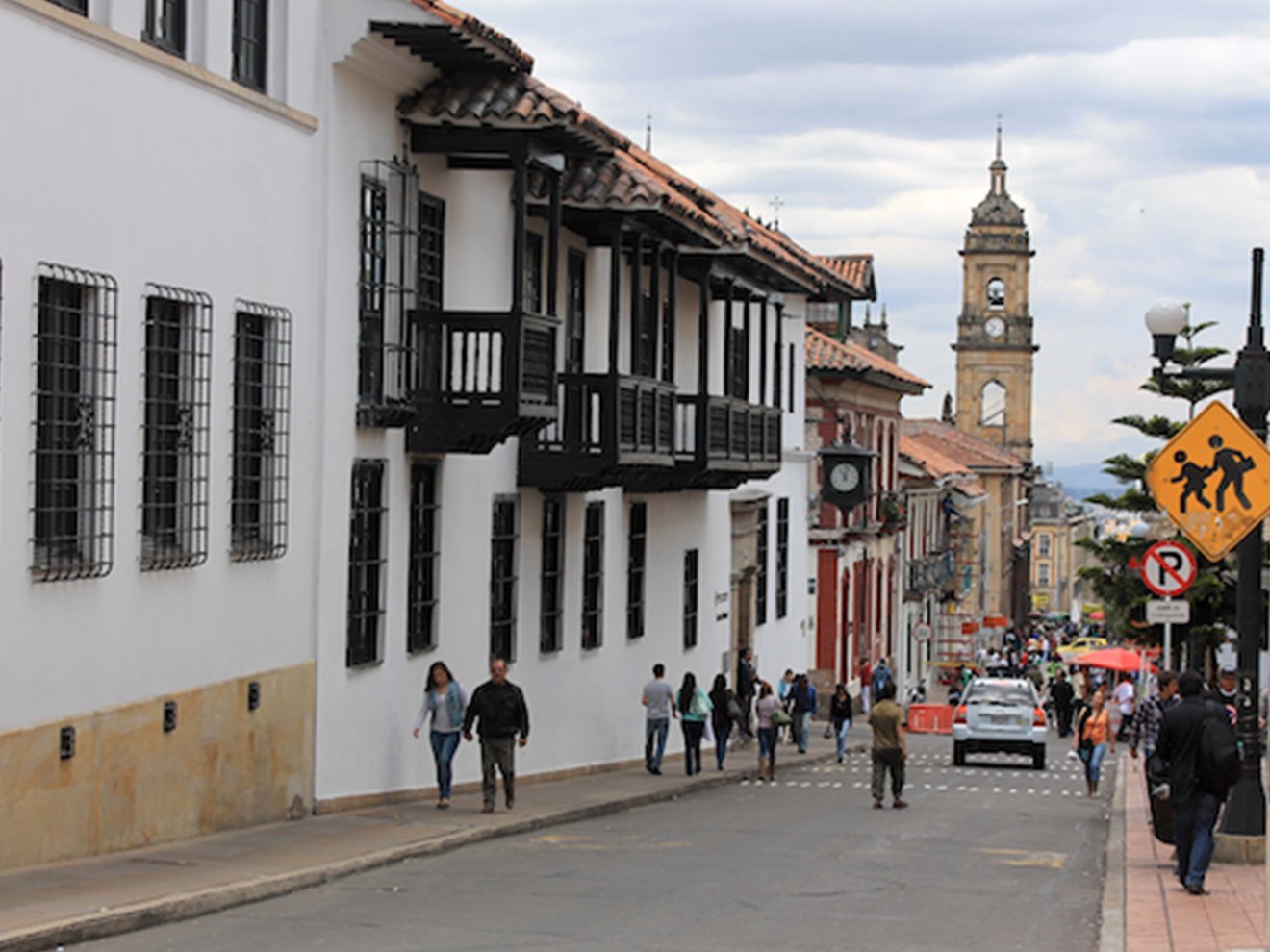 There are a million barrios (neighbourhoods) in Bogotá, but the one that everyone knows is La Candelaria and for good reason. It’s such a cool place even the president of Colombia calls it home! If you’re trying to decide where you should stay in Bogotá, look no further than this charming neighbourhood!

There a million of things to do in Bogotá, and La Candelaria is definitely on the top list. This neighborhood is the city’s historic district encompassing everything from Casa de Nariño, which is where the President lives and works, to quaint little cafés and stores and restaurants. With so many things to see and do, it’s definitely the place to be! And with over 30 hostels (basically the highest concentration of hostels in the entire city) and quite a few hotels, there’s no shortage of places to stay.

You can see it in the architecture as you walk down the narrow streets, many of which are still cobblestone!  The Spanish influence is obvious, as most of the buildings are in the original colonial and Baroque style (some dating back centuries) and you won’t find any skyscrapers. La Candelaria is home to a lot of the museums in Bogotá including the Museo Botero (Botero Museum), Museo Histórico de la Policía Nacional (the Police Museum), La Casa de la Moneda (Currency Museum), MAMU (Miguel Urrutia Art Museum), Museo Militar (Military Museum), Museo del Oro (Gold Museum) and La Quinta de Bolívar (Simon Bolívar’s house, read about him here)!

Helpful tip: many museums are free on Sundays! For some more Bogotá history, you can also read about El Bogotazo and El Dorado.

The neighborhood also gets to claim Plaza de Bolívar among its attractions, where you can find the Justice Palace (Palacio de Justicia), the House of Congress (El Congreso) and La Catedral Primada de Colombia (officially the Metropolitan Cathedral Basilica of the Immaculate Conception) all bordering the main square. Another drawing feature is the graffiti, of which an entire tour is dedicated to! It’s conducted by people directly involved with the urban art scene and who personally know the artists whose work you will see! You’ll get the stories and background behind the artists and their art. It’s one of the must-sees in Bogotá, so even if you don’t stay in La Candelaria, at the very least I recommend a visit!

The abundance of places to go out!

La Candelaria has everything you need for breakfast with your mom, afternoon coffee with your coworkers and a night out with your friends.  Its numerous hot spots fill the streets with people from dawn into the late hours of the night. Check out

, a small, but always poppin’ square with lots of options for food, drinks and shopping or you could even just sit outside and enjoy the atmosphere (there’s always music playing).  Nearby, is the university area near

, where there are even more restaurants, bars, a few clubs too and my personal favorite,

, a small version of the super popular, Andrés Carne de Res.  I also recommend going to

.  You’ll find several restaurants that all boast the best

(one of the foods you must try in Bogotá) and be sure to stop by La Puerta Falsa, the oldest restaurant in the country, for some of their famous sweet desserts!

For the reasons I’ve already stated, you should be realizing that La Candelaria is in and of itself a fabulous location because everything you could need is within walking distance! But, if you must go elsewhere in the city, it’s very easy to grab transportation (these are the basics). In the north of the barrio, near Parque de los Periodistas, is the Transmilenio station, Las Aguas, which is the starting point for a lot of lines. The big red buses only go north from here because they’re too big for La Candelaria’s tiny streets! But there are smaller buses (usually white) that pass through and don’t worry; there are apps that exist to help you navigate. If you’re not trying to go the public transportation route, you can always take a taxi or Uber that will pick you up or drop you off almost anywhere in the neighborhood.

This sort of falls under the second reason, but deserves it’s own because of its charm. Carrera 7 runs almost the entire length of the city and is therefore, one of the main streets in Bogotá. In La Candelaria, it stops being a street and only foot traffic is allowed. Once it gets a couple blocks from Plaza de Bolívar, it turns into an area where I’ve spent countless hours wandering.

You’ll find loads of stores lining both sides of the street to satisfy your itch to shop, as well as convenience stores if you want to just grab a beer and walk around. You’ll see a plethora of vendors selling artisan crafts, unique artists creating and selling their art right there on the street and food and drink carts offering all sorts of traditional and non-traditional things (be on the lookout here for some of the drinks you must try in Bogotá). By far, my favorite thing about this place is the random street performers. Sometimes, there are people posing as bizarre statues, sometimes there are Michael Jackson impersonators. Like the rest of the neighborhood, Carrera 7 is go go go at all hours of the day.

I got to live in the heart of La Candelaria for almost a month because that’s where my homestay was and I wouldn’t have wanted to be anywhere else. I spent most of my time just walking and exploring and there was still lots for me to check out! This is why I make it a point to always visit whenever I’m back in Bogotá so I can cross more things off my list. If you want to read about some of the other neighborhoods like Cedritos, Santa Bárbara, Chicó, La Calera, La Macarena or northern Bogotá, click away, but if you get the chance to stay in La Candelaria, you will most definitely be glad you did!

Thinking of staying in La Candelaria? Let me know where! Drop a comment and be sure to follow my articles on www.colture.com! Just can’t get enough? Subscribe to our newsletter and follow us on social media for all things Bogotá related.

Airbnb in Bogotá: how to choose the right one

Where to stay in Bogotá: meet La Calera!