Traditional Colombian games and sports: how to play rana 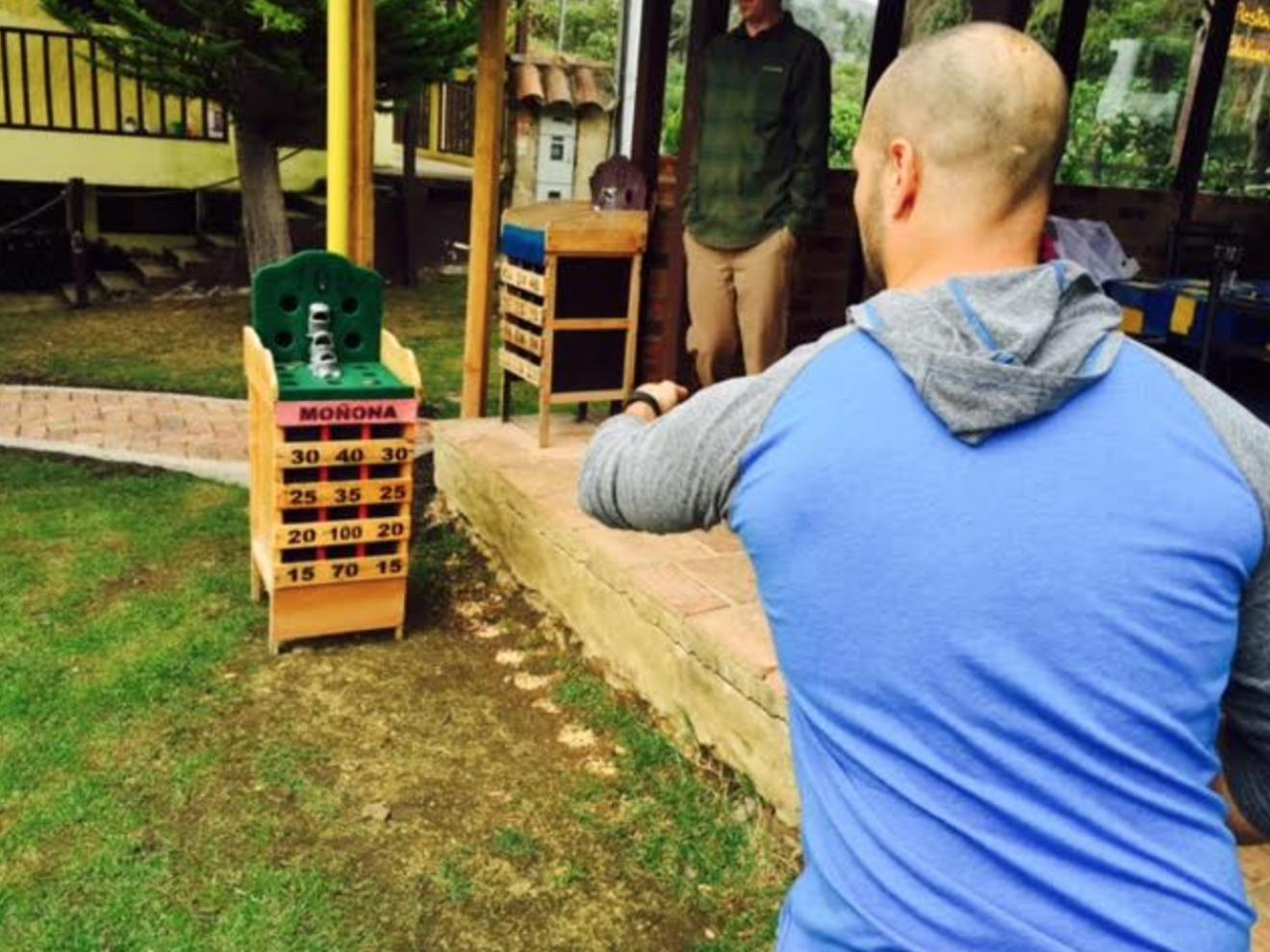 Being in Colombia is a lot of fun! And Colombians know how to entertain themselves pretty well. Behind the traditional sports and games we enjoy, there is a festive and happy spirit that characterizes our culture. Introducing the game of rana: I’ll show you one of the easiest and simplest ways of having fun here!

I know you know pretty well that nowadays Colombia is recognized for its outstanding level of football, but I’m also sure that you haven’t had the chance to know about many other sports and games Colombians live for. Trust me, we know how to entertain ourselves out of nothing as we always tend to see the bright side of things. The rana game has been around for quite some time now, especially in towns and rural areas where people ingeniously invent ways of having fun to entertain themselves. It’s a clear example of how to have fun with the simplest things and it’s also an important part of our culture among the numerous other traditional games and sports we have.

What exactly is the rana game and where did it come from?

The rana game is actually so easy to explain and extremely easy to play that I’m getting worried this article will be too short. The first important thing you need to know is that rana (read our article about basics in Spanish by the way) translates literally to “frog,” and it does have a frog involved in it (not real though, relax). Many people believe the game was invented centuries ago by the Incas as a way of worshipping frogs that were considered magical. It wasn’t a game at the beginning though; it was more like a ritual and I’ve actually found the original legend on the web so you can understand it better:

“A legend tells that toads were worshipped for their magical powers. During holidays, natives gathered to throw gold pieces into the lakes with the hope that a toad would jump and eat it and turn into gold. Legend says that when this happened, the thrower was granted a wish.”

A perfect opportunity to have a good time

The rana game, just like Tejo (read my article about it), is the perfect excuse to gather with friends and family and enjoy a nice and unforgettable afternoon. It’s likely that many Colombians even have the game set up at their house, so it’s also very accessible, but more commonly, you’ll find it in bars and some restaurants, where you can also enjoy a couple of beers (read our article about typical alcoholic drinks) and have a lot of fun. The rana game is actually a great betting game as well, and people play it with small prizes (they can be material things, an offer to pay the bill, or an invitation to experience something).

How to play the rana game!

Enough said about the game and its peculiarities, let’s get to the interesting stuff! The rana game comes in a medium-sized box (somewhat similar to an arcade) with metal frogs that sit at the top (you heard that right). It also has a series of holes that are beside the frogs. The main objective is to land the metal rings or brass coins inside the mouth of the three metal frogs that sit at the top (trust me, experts do it often!), but you also get points if the rings land in other holes. The rana game can be played individually or in teams of two, and so, each team is given six metal rings or gargollas (as they are called in Spain).

Each player must stand approximately 3.5m away from the box, and then take turns tossing one ring at a time. Points are predetermined on a scoreboard on the wall and awarded according to where the metal ring lands. Each part of the box has an assigned score. The metal frog is 50 points, the mill is 25 points, the bridge is 10 points, and the remaining holes are 5 points. Once all the metal rings have been thrown, each player sums up his/her points and the one with the most points wins. This is just one of the numerous versions of the game. You can also play it by the number of shots or rounds, for example.

Though it sounds pretty easy, the accuracy of the shot is quite difficult at the beginning, as you’ll need concentration to toss the metal rings at the top of the table. Experts, or people that have played it many times, whatever age they might be, do this easily, while also preventing the rings from hitting other people’s heads or the walls (which happened to me the first two or three times I played). The most difficult part is that the mouth opening of the metal frog fits exactly one, and only one ring, and to get that right, it actually takes hundreds of shots.

Where to play in Bogotá!

As I mentioned before, you can either have the rana game at your own house or play it at bars or restaurants. Now, if you want it to gracefully sit in your living room, then, of course, you need to buy it, and it’s not that cheap (but it isn’t expensive either). But if instead, you play it while having beers and food at a bar or restaurant, most of the time it’s free to play. In case one, the box will cost approximately $120,000-$170.000 COP/ $38-55 USD, and you can buy it online on web pages such as Millán, Mercadolibre, and Fabritejos JV. In case two, just head to some bars or restaurants that have a box of the rana game, like Bukowski Bar and Bar Billares 53. There is also a high probability that you’ll find a box of rana if you stay on a farm or cottage house near Bogotá (read our articles about warm places near Bogotá and places to visit and stay).

Actually, I’m adding a third option as well, in case you want to build it (which is possible but requires more time, money, and patience). To learn how to easily build it, click on this link.

I hope that whenever you are in Bogotá, you can find an opportunity to play traditional sports and games like rana. Think about it this way: one, you are going to have lots of fun with your family, co-workers, and friends in the simplest way, two, you are going to experience a very local thing that has been part of our culture for years, and three, you might even get a nice prize out of it! What else can you ask for!?

Was this article useful? Do you know more cool stuff about the Rana game? Or maybe an experience you would like to share? Please share and/or comment on this article, and visit our homepage to take a look at my articles and many others to find more essential information about Bogotá before and during your trip.

Make some noise with these traditional Colombian instruments!