Jaime Duque Park: a day trip to the Taj Mahal of Colombia 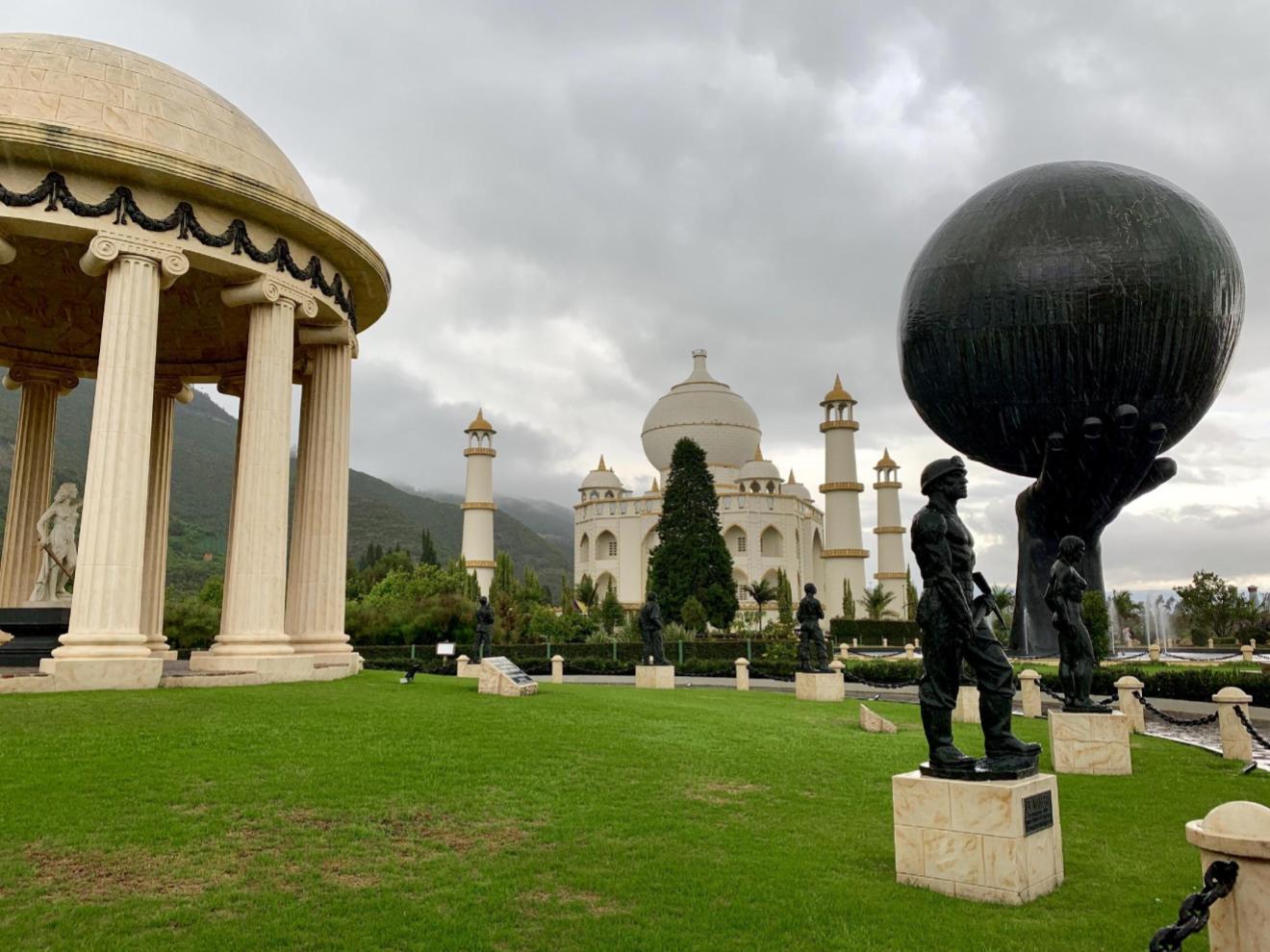 Just north of Bogotá is one of Colombia’s most unique attractions. Jaime Duque Park is a theme park unlike any other in Latin America. Although the park remains relatively unknown among tourists, exploring it is a fantastic way to spend an afternoon that you won’t soon forget!

Heading north out of Bogotá, the hustle and bustle of the city quickly give way to more rural landscapes. Asphalt and brick buildings are replaced by the rolling hills, green pastures, and a smattering of small towns that make up the Colombian countryside. But suddenly and quite unexpectedly, the ornate teardrop dome of the Taj Mahal appears on the horizon. India’s Taj Mahal is roughly 15.000 km from Bogotá, so what exactly is going on here?

The answer is Jaime Duque Park. Thanks to one man’s enigmatic dream, Colombia has its very own full-scale replica of India’s fabled Taj Mahal sitting just thirty minutes north of Bogotá! The replica Taj Mahal is the centerpiece of Jaime Duque Park, a fascinating and sometimes baffling theme park that remains relatively unknown among tourists visiting Colombia’s capital.

Bringing the world to Bogotá

Jaime Duque Park was opened in 1983 by Jaime Duque, the first chief pilot of Colombia’s national airline Avianca. By opening the park, Jaime Duque hoped to create a space where Colombian families could spend a relaxed afternoon experiencing and learning about the history of the world and its diverse cultures. The replica Taj Mahal is a perfect example of this – it allows visitors a glimpse into a far-off country that many people will never have the opportunity to visit firsthand.

The Taj Mahal is perhaps the most iconic and visible structure in Jaime Duque Park, but it is far from the most unusual or surprising. Much of the magic of the park comes from the seemingly-random assortment of attractions. For example, where else can you take a picture of a full-sized brontosaurus statue with the Taj Mahal in the background? Or snap a photo of flamingoes lounging in front of both an authentic naval transport ship and a replica pirate ship?

In some ways, my favorite part of my first visit to Jaime Duque Park was the fact that I didn’t know what to expect. I had heard about the replica Taj Mahal and seen it from the highway, but I had no idea what other fascinating structures, exhibits, sculptures, and monuments were in the park. I spent a full afternoon wandering around and marveling at the odd combinations and juxtapositions that the park creates. Often times I found myself wondering “Why? Why is this here???” but at the same time, I couldn’t wait to see what lay around the next corner.

To give a taste of the absurdity that is Jaime Duque Park, some of my favorite attractions included replicas of the Seven Wonders of the Ancient World, a recreation of Moscow’s Red Square, life-sized dinosaur sculptures, and an extensive exhibit with dioramas showing the most significant events in human history from the evolution of man to the moon landing! In addition to its quirkier attractions, the park also contains a massive zoo housing animals from all over Colombia, Latin America, and the world.

Know before you go

Taking public transportation to Jaime Duque Park is both easy and economical.  First, head to the “Portal del Norte” Transmilenio station. Exit the station and walk 5 minutes north until you arrive at a pedestrian bridge. Just past the bridge is a busy bus stop where colectivo buses constantly pick up and drop off passengers. Wait for a colectivo heading to Tocancipá. When you board, make sure to ask the driver or assistant to drop you off at Parque Jaime Duque. The fare usually costs about 5.000 pesos (USD $1.50) per person.

For other cool and similar plan read our article about Bogotá’s Botanical Garden.

Jaime Duque Park is unlike any other theme park in Latin America. Visiting it is a great way to get off the beaten tourist path in Bogotá, and is likely to be an experience you won’t soon forget. Have you visited Jaime Duque Park? Comment below to share your favorite memories and be sure to follow my articles on www.colture.co for more from Bogotá and the surrounding area!

Feria Buró: the country's biggest design fair is in Bogotá