Typical Colombian soups: comfort food at any time of the day 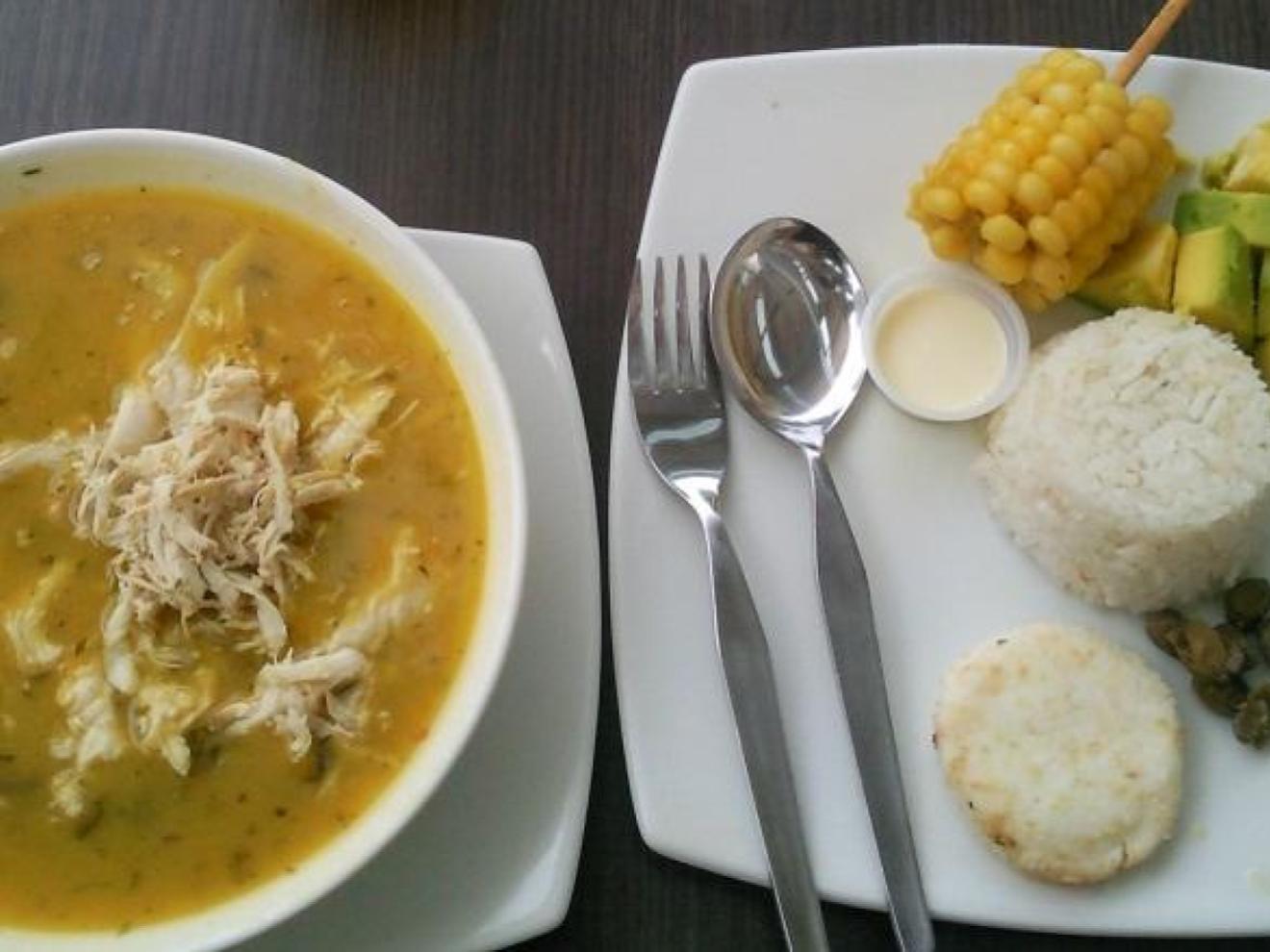 Even if you speak Spanish, the one-word names that Colombians have for their soups will probably leave you stumped as to what’s actually in them. Luckily, I’m here to unravel the mystery. Spoiler alert if you prefer to be surprised by your menu selection.

Colombians love their soups, dare I say, as much as they love their rice. It’s the perfect food for Bogotá’s cool climate, so it only makes sense that a couple of the main Colombian soups originated in the capital. However, you can find all of them in restaurants throughout the city. Get ready to make soup a regular part of your diet for as long as you’re in the country.

Bogotá’s signature hearty chicken and potato soup is jam-packed with stuff to keep you full for hours. In addition to containing several different kinds of potatoes, you’ll also find corn cobs and onion, and capers, avocado, and sour cream on the side to add to your liking. You can find my favorite ajiaco in the neighborhood of La Candelaria just off the Plaza de Bolívar on the street to the left of the cathedral. There are a few restaurants there that all boast “the best ajiaco” and I can’t say that I disagree with any of them.

The morning soup you didn’t know you needed! My homestay host prepared this for me when I told her I hadn’t tried it yet and it was then that I realized that soup is, in fact, a breakfast food. This one’s pretty simple: milk, eggs, potatoes, bread (because one type of carbohydrate is never enough), green onions/scallions, and lots of cilantro. It’s a very traditional way to wake up in the central Andean regions of Cundinamarca (the department of which Bogotá is the capital) and Boyacá.

This soup doesn’t need any sides because all the food groups are already well-represented. The main ingredient is beef tripe, but that’s not the only meat. Pork and chorizo fill out the protein part of this dish, and then you’ve got a medley of vegetables and some potatoes. Quite a few spices go into it too, the combination of which gives mondongo its rich, distinct flavor.

Yes, this soup contains potato as well. Along with beef ribs, chicken, onion, tomatoes, carrots, plantains, yucca, and corn, many Colombians will also throw rice and avocado in it for more substance (not that it needs it). Sancocho is often part of a typical menú del día lunch that you’ll find in so many restaurants throughout the country.

Caldo means broth, so the caldos you’ll see on menus are variable. Some of the more common ones are caldo de costilla, beef ribs, de pescado, fish, de pollo, chicken, and de menudencias, the parts of a chicken you didn’t know were edible, like the feet. The recipes can vary slightly depending on the type of caldo, but the standard includes carrots, herbs, and we can’t forget the potatoes. Pro tip: if you’ve got a hangover, they say that caldo de costilla is cure.

Named for the pot they’re cooked in, cazuelas are stews. The most common of which you’ll find are de frijoles (beans), de pollo (chicken), and de mariscos (seafood), which is more like a cream). Helpful tip: while the cazuela de frijoles sounds like a good vegetarian option, it almost always has bacon pieces in it, so make sure you ask your waiter if it does.

Cream of spinach (crema de espinaca), cream of mushroom (crema de champiñones), cream of carrots (crema de zanahorias), cream of vegetables (crema de verduras), and many others are all soups that you are probably already familiar with. Well, they have them here in Colombia as well! Cremas are heavier, obviously due to the dairy element that is added, while sopas (soups) are your average soup with a chicken broth base (de gallina). Sopas are very simple and usually come with corn (mazorca), the beloved potato (papa), and a few veggies. Sopa de lentejas (lentils), plátano (plantain), and yuca (yucca) are a few of the popular ones.

I wasn’t a soup person before I got to Colombia, but I’ve sure turned into one! With my menú del día, I typically order sancocho, assuming it’s available. My absolute favorite, though, is ajiaco, and while I can find it in the coffee region, no one prepares it quite like the capital locals, so I always make it a point to get it when I visit. You’ll notice that lot of Colombians like to put rice in their soup and it’s actually normal to get it as a side. Of course, you can always order soup on its own, and some of the ones on this list are certainly hearty enough that you don’t need anything else to go with it. However, that doesn’t mean that it comes by itself! Nearly every soup is accompanied by a little arepa, or arepita, if you will, and if you don’t get one of those, you’ll get a banana. Leave it to the Colombians to come up with this unexpected combination, but they really do go together like bread and butter. Happy slurping!

Which one sounds like your cup of tea? If you liked this article, check out my other ones!  You can also subscribe to our newsletter and follow us on social media for all things Bogotá related.Are you a local business? Get in contact with us to be featured on our website!

The tasty world of Colombian potatoes and its importance