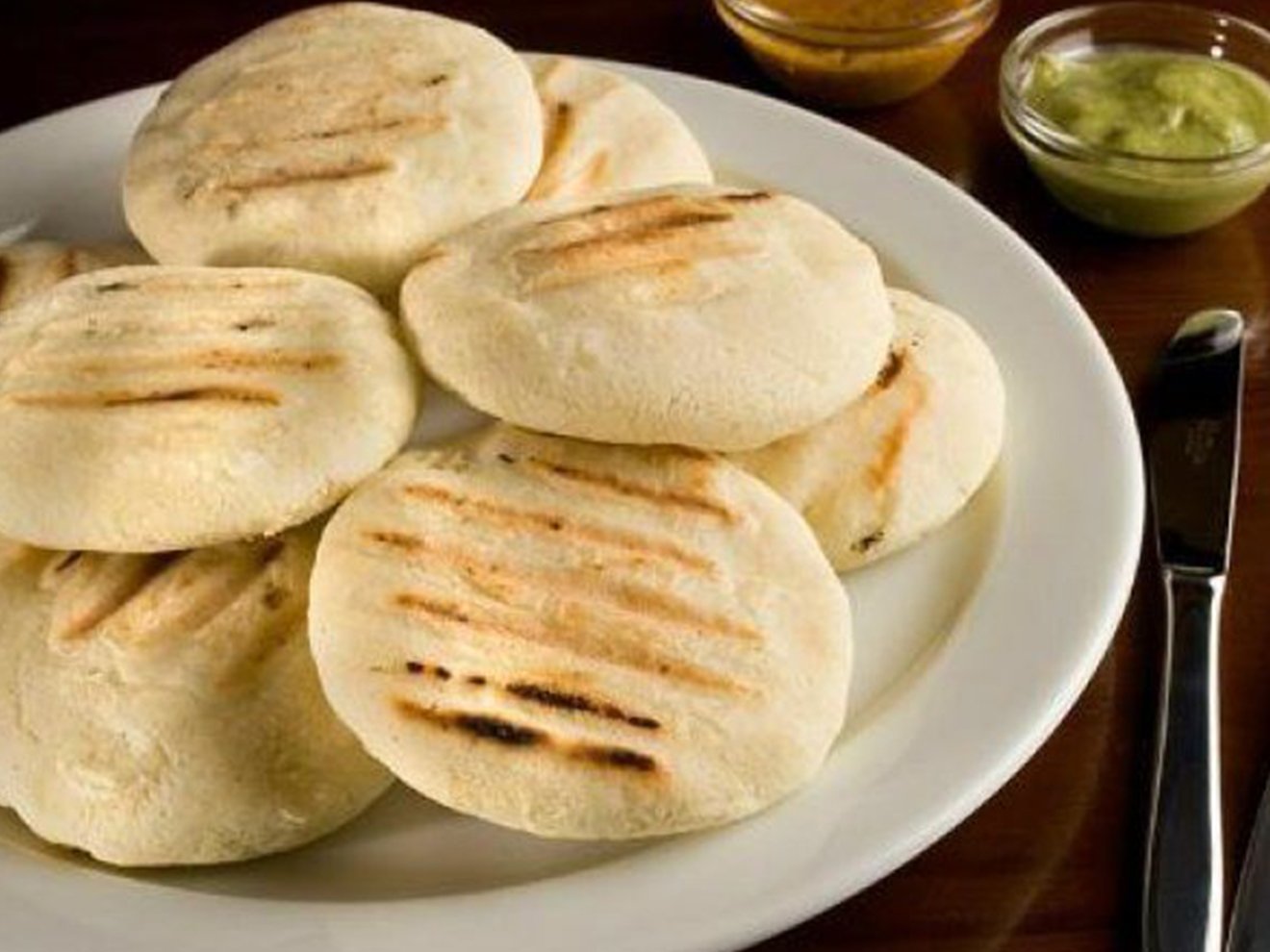 In Colombia we have tons of typical, delicious food; it is something we are proudly known for. But if I could choose the most versatile and delicious thing, it would definitely be arepas. It isn’t just the taste, but also the fact that it can be cooked and consumed in many different ways, that makes this tasty food a must-try. In this article, you will find a little bit of history as well as where and how you can try arepas when coming to Bogotá.

Arepas are well-known all over the country. Without a doubt, almost every single Colombian has tried them. They are basically made of white or yellow pre-cooked corn flour and come in a round, flat shape. Preparation is very easy, although, over the years, people have created many variations and combinations. In Colombia, it’s very traditional to eat them for breakfast, but it’s also a good snack or side dish (and that’s why it’s so versatile).

A little bit of history

Arepas have been part of the traditional Colombian diet for centuries. First appearances date back to the pre-Colombian years, long before our territory was conquered by the Spanish. The indigenous people had corn as part of their basic diet and cooked or used it in beverages to drink until they came up with a new use for the grain. However, over the years, its preparation was only known between a few people who actually knew the original recipe. It was not until the twentieth century, with the arrival of industrialization, that the pre-cooked corn flour was invented. and after that, the arepa was internationalized and diversified because it became easy to prepare and widely known.

To prepare the basic and most traditional arepas you’ll only need:

These ingredients can be found in almost any supermarket or local neighbourhood shops (tiendas). Try going to Éxito or Olímpica.

Mix all the ingredients in a large mixing bowl until you have soft dough. Cover with plastic wrap for five minutes, then take a little bit and start making the round, flat shape. Fry in a pan (five minutes each side) or bake in an oven for about ten minutes.

There are probably hundreds of ways to prepare and eat arepas. It also depends on the region, because in Colombia, each one has its own traditional recipe. To name just a few, you’ll find arepa de huevo (stuffed with a fried egg, sometimes with cheese and meat too), arepa de queso (stuffed with layers of cheese), o arepa de choclo (made with grains of tender corn and sweetened with sugar or panela).

The most exotic variation of arepas would be the “arepas rellenas,” meaning stuffed with something (other  than cheese or egg). It’s like a hamburger, but instead of bread you use arepas. In recent years, the idea of arepas  as a meal, more than a snack, has led to amazing recipes and enjoyable gastronomic experiences.

Are you ready to hear this?

Want to try arepas in Bogotá?

You can try arepas almost anywhere across Colombia, but if you are coming to Bogotá, I recommend going to Siervamaría (address Carrera 8º #12B-26) in La Candelaria, where you can try one of the best arepas de huevo in the city. Arepiz (address 147 # 12-33) in Cedritos where you’ll be able to understand how versatile arepas are by trying some stuffed with meat or salami for example. Don’t miss Andres Carne de Res, one of the most traditional and touristic restaurants located on the outskirts of Bogotá, in Chía (though it has a restaurant in la Zona Rosa of Bogotá too ), where they make one of the best arepas de choclo. And if you want to try some of the best “arepas rellenas,” go to Arepana (address Carrera 11 # 69 – 67). Also, remember that arepas are usually eaten with a drink that might be juice or even soda. Take a look on our articles Foods You Must Try in Bogotá and The Best Drinks to Try in Bogotá to find more information about gastronomy in the city.

I hope this little guide was a good introduction to truly one of the most delicious foods you’ll ever taste. Eaten anytime, anywhere, and embodying the diversity of our culture, arepas are my personal favourite, and they will probably leave you amazed too. Want to know another major plus? Arepas are ‘gluten free,’ so it’s a really cool option for people who can’t enjoy breads and pastries. When coming to Bogotá don’t miss out on the amazing gastronomic experience of trying and enjoying different types of arepas.

Was this article useful? Do you know any amazing places to try arepas? Or maybe an experience you would like to share? Please visit our homepage Colture and take a look at my articles and many others to find more essential information about Bogotá before or during your trip.

Time managing in Bogotá: how to organize your day here

Colombian gastronomy: the world of empanadas