Christmas in Colombia is like no other. We even have our own version of Santa Claus and we celebrate it on December 24th, not on the 25th as in North America or Europe. Founded in the Catholic tradition, every Christmas Eve Colombian kids patiently wait for El Niño Dios (God Child or Baby Jesus) to deliver the presents under the tree.

I always believed in El Niño Dios when I was growing up. Each Christmas, I was eager for him to come so I could finally open the presents I’ve been waiting for at midnight. My faith wavered when I realized (because of T.V. shows and movies) that there was also Santa Claus, and so, I didn’t know what to believe anymore. But then I came to the conclusion that for us in Colombia, the tradition of recognizing El Niño Dios as the entity or magical character that brings presents at Christmas has always been the primary and official belief. And, as a Catholic country, El Niño Dios has weathered time from generations to still be considered and identify as THE one.

Since July, little Carlos began to write his letter to El Niño Dios. He thought for a long time about what he wanted: toys, a bike, Hot Wheels, peace, love, etc. And then, when December finally arrived, he put his letter on the Christmas tree and went to sleep. He woke up the next day and the letter was gone.

Months passed and Christmas finally arrived. On December 24th, little Carlos patiently waited until midnight for his presents to arrive; he was going to open them straight away. He knew well that El Niño Dios was almost impossible to see, so he rejected the idea of spying or bringing him cookies; that worked with Santa Claus, not with El Niño Dios. And in this country, everyone knows that it’s he who always brings the presents.

The night went by without a single trace of El Niño Dios, but when the clock struck 12:00 am, he and his family rapidly proceeded to open all the presents that were now piled under the tree. And Little Carlos was happy with his new bike and his new toys.

The story of little Carlos sums up how this whole idea of El Niño Dios works (and it’s, in fact, very similar to the idea of Santa Claus). The battle between Santa Claus and El Niño Dios began many generations ago with the influence of the Spanish and the Americans that has permeated the Latin American region for centuries.

Nevertheless, in Latin American countries, the traditions are less influenced by the Anglo-Saxon celebrations, partly because of Catholicism, which is the official religion in most of these countries and was brought by the Spaniards.

Now, it’s quite interesting that El Niño Dios, who was born right on Christmas Eve (Christmas in Spanish actually means birth), is the one bringing the presents. How does a newborn bring them then? Well, the logistics of this story have actually been at a disadvantage over Santa Claus; Santa ’s fantastical, yet somewhat feasible story, does explain exactly where the presents come from and how they are delivered. In contrast with El Niño Dios, who nobody knows for sure how he does it. In fact, if you ask kids about it, they’ll probably come up with several different versions. Don’t be surprised if little Carlos tells you that El Niño Dios comes in a magical flying car or if another kid tells you that El Niño Dios owns every single toy store where he gets all the presents.

Another known version says that God is actually the one who sends the presents, but he can’t deliver them because there’s no ladder from Heaven to Earth, so he asks El Niño Dios to distribute them for him.

But whatever the backstory might be (there has to be an original or a more accurate one that someone somewhere knows), El Niño Dios lights up Christmas for Colombian kids each year. It’s inevitable that the little ones start to smile when they see the presents under the Christmas tree.

It’s also important to know that we have a mix of traditions at Christmas. People here actually advertise and believe the whole story of Santa Claus and the reindeers, while still expecting El Niño Dios. And this is, as I said before, part of our mixed heritage of the Anglo-Saxon and the Spaniards’ culture (even if one is more relevant and present than the other). Truth is, we don’t believe one story more than the other.

The Christmas tree and the pesebre, which is a nativity scene that represents the birth of Baby Jesus (its production is quite a big deal in Colombia and it’s always placed next to the tree), are two traditions that show this mixed heritage we proudly have and share with the world.

If you happen to be in Colombia during the holidays, you can’t miss the magic of this day with your family and friends. El Niño Dios brings presents to everyone and is an important part of a very special day (read our articles Christmas and New Year’s traditions in Bogotá: Aguinaldos and  Bogotá: a Christmas lights show that you have to experience to know about other ways of having fun at Christmas).

And remember not to confuse him with Santa Claus!

Was this article useful? Do you know other cool stuff about Christmas traditions in Bogotá? Or maybe an experience you would like to share? Please share and/or comment on this article, and visit our homepage Colture to take a look at my articles and many others to find more essential information about Bogotá before and during your trip.

The sound of music: Colombian Christmas instruments to play

Madagascar the musical: From Dremaswork to Bogota

Photo by Madagascar the musical 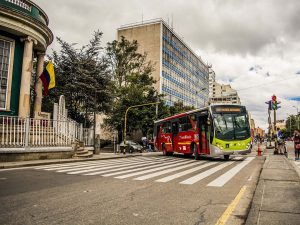 Transportation in Bogotá: basics for navigating the city!

Weather in Bogotá: tips to help you pack for it!